Today we commonly feel the urge to move faster – take notice faster, learn faster, decide faster and act faster. It becomes a struggle. Still we can’t just decide: let’s be faster. There are situations, behaviors, previous experience and other things slowing us down. Let’s gather some analysis on what are the common situations asking for faster action, and what could be the simplest solutions at hand helping us find a way to move in a Fast Forward way. Sometimes, however, emotional breakdowns and feeling of failure slow us down considerably – so let us have a look at what can be done about that. 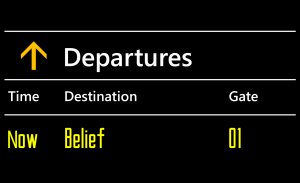 Long term stress, feeling down, failing to believe in a goal at hand – those are common problems, making lighter or heavier impact on people involved. It’s great if it’s not so. It’s good, if we are able to handle situation by ourselves. Unfortunately, often we aren't strong enough to solve a problem and it’s good to have someone supporting you at such a moment. This topic also might be important to a wide range of managers – employees in stress, feeling “blue” or believing in failure are just not too effective! Even the best of professionals lose their grasp when feeling down. Projects get delayed, people leave companies, and companies face financial losses.

So how do you help a friend or a colleague? How to raise his belief in his own success?

You have to understand and acknowledge what’s important for him and how he sees the world around. First of all, he believes that the situation is inherently bad. Secondly, his emotions are rather intense, i.e. he sees world emotionally. He’s able to communicate his opinion very logically, providing arguments, but his reaction to arguments provided to him will be more emotional than rational. Thirdly, a person can only stop feeling down by himself – no force on Earth can force anyone to feel good about anything.

Overall – that’s it. You've done what you could – supporting another person in such moment of need is, I suppose, a good deed after all! 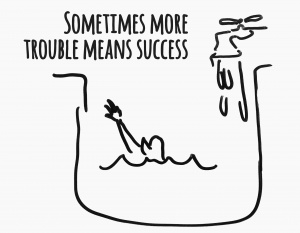 Here’s how the „Path of Doubts” looks like from the point of view of the other person:

And never forget: despite all your efforts, a person can in a blink of an eye revert back to any of the previous states… If you have any questions about the topic or would like to discuss case at hand – feel free to contact us!