— What do you do for work?
— I solve problems whose existence I did not know about using methods I do not understand.

(From an eavesdropped conversation)

Oh, my! Has it really been two weeks already? Honestly speaking, it’s a little hard to believe, but it’s even harder to argue with my calendar. Last time I promised to report if I would still be alive. As you are reading these lines, you can probably guess – I am! Still alive and kicking… that is, clicking. At my new metal computer. Good morning!

Consider this an official soundtrack to the post! It will be useful for you because below there will be #ManyLetters #sorrynotsorry #ProductionThriller #UsefulOfficeLifeFacts.

Most of the week I was busy groping elephants in a dark room, like in the famous Indian parable.

The first elephant was a big project of an important client. The project was big while I was, well - small. Hence, I ended up learning it with the widely practiced method of scientific poking. While at it, I also got to know the team on the client’s side, found out how and what is to be done.  Since nobody had given me a manual (who reads them anyway, right?), all of this took place exactly like in the Indian parable – you grope, “ask questions”, try  to break something to do something useful. In the process, you learn something new. As you are learning it all yourself, it’s imprinted into your brain firmly and permanently.

If the project was huge and the team was big, my induction would probably have been more formal. But I’m not a fan of that kind of training. Yes, they give you the big picture quicker but:

So, generally, I prefer the “me, myself” method. Truth be told, though, in the past two weeks this “me, myself” thing has cost quite a few nerve cells to both myself and, to my greatest sorrow, others around me. Please, forgive me!

Do you remember how last time I told you that a good intern™ first tries to solve the problem himself and only then asks for help? My words would not be worth a dime if I only said so… hence, I started doing! Surely, sooner or later I would have received a teeth-grinding task.

And, of course, I received it right away! I was required to fix a bug that, first of all, does not occur every time but only in particular situations; secondly, has started occurring sometime this summer but nobody could tell me when exactly. The cherry on top? It was difficult to replicate locally to test potential solutions.

I butchered more hours and nerve cells on it than I’m ready to admit. First, I thought it was possible to fix, but my fix did not work :(. Moreover, I was NOT the reason it failed! However, since I did not know that, I had started losing my mind, being convinced that it has to work SOMEHOW, at least break something… but nothing happened!

This misunderstanding did not merely make me look deeper into the issue. I buried my head into this bug and spent several days living in it and all its related mechanisms. When I, thanks to my mentor, finally found out that the fix was merely not tested correctly, it was already “too late”. I understood that my solution would most likely not have worked.

Hence, I made a new fix. It did not solve the problem fully but helped us and our colleagues on the client’s side learn that things are broken even deeper than we thought. As I had figured out the mechanism so deep that I dreamt of it at night, I immediately suggested another solution. A solution that successfully cleared all tests and eventually, along with several other, less serious fixes, went out to constitute my first patch!

I’ll be honest: I do not believe I will ever forget this thriller. Your first “quite unpleasant” bug, as my mentor called it, is something hard to forget. You are reading it in 30 seconds; I have lived it for at least a week (of incomplete workdays, I must remind you).

I also cannot miss noting the benevolence and support of my mentor and other colleagues who were aware of the situation. It feels like everyone around me honestly wants for me to succeed! I think I recovered (and I was VERY nervous during this entire epic, mostly because it was a real project for a real client) so quickly not only because I eventually found a solution, but also because I have been feeling everyone’s support. Thank you, colleagues!

Let me draw your attention to one point: this problem was not a super-high priority for our client. They had lived with this bug for several months and one week here or there was not a deal-breaker. This is exactly why I had decided for myself that I had to, that I must figure everything out myself, as much as possible. As we call it, «get over it or die trying».

This bug wasn’t the only one I had worked with, though. At some point, I had received a task critical to the client and quickly realized that I would take unforgivably long to resolve it. This is when I momentarily involved my mentor! Yes, he helped me a lot, and during the process I had the opportunity to compare our work speeds. Alex, understandably, works several times faster and knows by a (mathematical) order more, but it could not have been otherwise.

To sum up our conversation about this “elephant”: during my second and third week I acquired priceless experience; was internally dead and reborn several times; took out my own and (sadly) others’ brains as well. Nevertheless, I also realized that I am not completely hopeless and don’t just want to do what I’m doing, but am also (maybe) skilled at it, too. Thanks to that (and the strong support of everyone involved!) I got calmer and more confident in myself.

Let me note on the margin that I work more than I’m meant to. At Idea Port Riga nobody told me to do this, not with a word, a deed, a hint or a wink (quite the contrary, everyone clearly and unambiguously told me to relax). To work overtime or not is a personal decision of each employee and intern, I do not want to imbue anything to anyone.

For myself, I determined it simply: I was given a chance to change careers, was opened a door that I had knocked on (just like on the cool posters hanging on our staircase walls!). I would be an idiot if I did not do everything possible and impossible not to make full use of this opportunity. Yes, there will come a day when I will be leaving my work at work. That day just has not come yet! 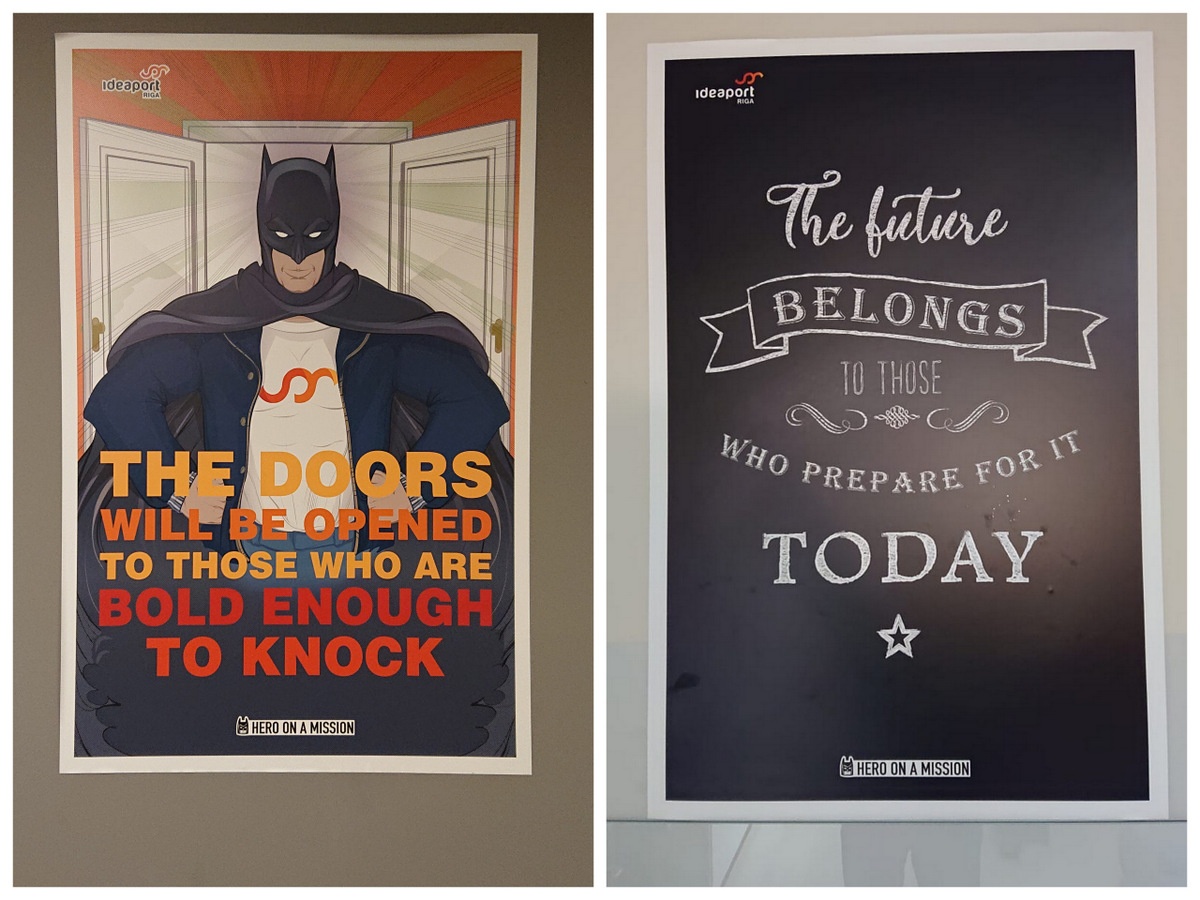 Well, yes. The second elephant I was busy groping was, of course, Idea Port Riga itself.

What do I mean? When you come into a new company, you know almost nothing about it. I knew some things, like their address and kitchen (oh, I already mentioned the kitchen in my last post, right..? Sorry!). But most things I, understandably, did not know.

However, I have found a method to learn in two weeks more than I could ever learn hanging out in the kitchen at any other company. I studied our internal social network Yammer, which is available on both computers and smartphones.

No, seriously! I am not a fan of social networks (mildly speaking), but in a situation when you irretrievably sit separately or – even worse -  work from client’s site all the time… How else can I be with everyone else at Idea Port Riga? Yammer has shared thematic channels, in which I personally have discovered:

And these are only the most interesting and valuable bits. In general, Yammer lets you interact and remind colleagues that you’re still alive! Funny how more colleagues smiled at my jokes on Yammer than I personally know in real life.

This happened, among other things, because (as you know from Part 1) I was almost alone in my office. People who decided to put me there had clearly read my thoughts. They knew that initially, it would be more comfortable for me if I could focus on unfamiliar and scary work. Humanity has not yet invented anything more conducive to that than an empty room. I’m grateful to these kind people for not putting me in some spandrel closet under a staircase. It’s a rather comfortable room with a big window and a comfy chair.

The logical drawback is clear, though: I basically do not go out to the kitchen. First of all, it is on the other floor, and I’m lazy and do not have time (alright, just do not have time). Secondly, I do not spend enough time in the office to need a second cup of coffee (and, judging by this, I probably sleep too much), while water is readily available on my floor, too. A tip to office managers: if you want people from other floors to come to the kitchen more often, remove the watercoolers – they make us antisocial! That was a joke.

To be serious, I understand that it wouldn’t be bad to go out more, but I honestly do not have time. Good that in addition to Yammer we also have WhatsApp, where we have organised, terribly secret (honestly, I found out about Yammer right away, but not about WhatsApp) Interest Groups. One of them, for example, like a bell on a ship, invites everyone to the Darzciema office kitchen when there is a distribution of free pies :). Another is dedicated to grill-parties. And so on, and so forth.

Of course, it would be more convenient if all of this (including work conversations) was organised in, say, Slack, which I am quite used to. But a normal functionality of this cool, without discount, chat costs money. Meanwhile, in IPR, where – as I also found out during these weeks – most of the profits are shared with employees*, money is not wasted easily. And I like that.

In the upcoming episodes: why I was stuck on the third floor sitting alone, how to survive mentor Alex, impostor’s syndrome, why I envy students, part-time vs full-time, is it necessary to work from home, am I still alive, how many of my “fixes” are wrapped up by testers (NEW!), what do my family and friends think about this, how our work is changing the world (NEW!) – and other small work problems of an experienced intern.

* — “Editor’s” note: We only leave a reserve for a rainy day, common activities and planned improvements to our office infrastructure (tables, chairs, computers), while dividing everything else between employees as bonuses.